The Championships took place on Saturday in the town of Câmpulung Moldovenesc in north-east Romania.

Athletes from Romania, Slovenia, Turkey, North Macedonia, Greece and Bulgaria raced over a 5.6km, 480m+ circuit with 2 laps for Seniors and 1 lap for U20s.

In the senior women's race it was Romania's Denisa Dragomir, 4th at last year's championship, who went out hard, leading her compatriot and 2021 silver medallist Ingrid Mutter by over a minute after the first lap. Dragomir couldn't sustain her early pace but did more than enough to hang on for the win, coming to the finish in 1:10:25. Martina Potrc of Slovenia is more often found racing ultras than mountain races, but has been on fine form in shorter mountain races recently; second at the Slovenian Championships 3 weeks ago, she ran a strong second lap to move through the field, finishing second in 1:11:58. Mutter was 3rd in 1:12:43.

With 3 runners in the top 5, Romania comfortably won the team prize ahead of Turkey and Bulgaria. 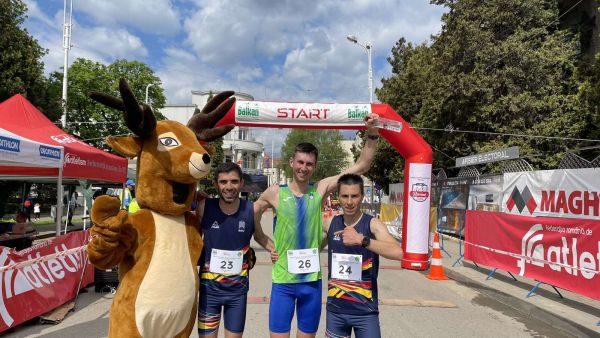 The men's race followed a similar pattern, with 2021 champion Timotej Bečan of Slovenia leading after the first lap and remaining strong through the second to defend his title in 58:14. Behind, the battle for the remaining medals was between two Romanians, Ionuț Zincă and Bogdan Damian. Despite running the fastest 2nd lap of the day, Damian couldn't quite close the gap to Zincă, who took silver in 59:38, just 5 seconds ahead of Damian.

Bečan's win, on top of his Slovenian title 3 weeks ago, is enough to move him up to third on the World Mountain Running Ranking.

Turkey swept the golds in the U20 races, with individual wins for Hakim Dursun and Sila Ata leading strong team performances.

Full individual and team results for both Senior and U20 races are available here.