Be Cordial Beyond the Coast Sky Tour Gran Canaria

The Romanian runner Lionel Cristian Manole and the Canadian athlete Claire Heslop were winners of the ultra distance race in the fourth edition of 'Be Cordial Beyond the Coast Sky Tour Gran Canaria'.

The 88k Ultra Sky AAA82 started at midnight on Friday 15th October from El Pajar beach in Arguineguín, to cross the island passing through Pico de Las Nieves, Cruz de Tejeda, and Artenara, before reaching the finish line in Puerto de Las Nieves, in Agaete, the same spot as for all three courses.

The men's winner, Lionel Cristian Manole, dominated from start to finish. He finished with a total time of eight hours, thirty-one minutes.A very exciting fight for second and third position in the men's race took place. Both local runners, Ricardo Trujillo and Alejandro Mayor, maintained gaps of between two and three minutes before reaching Artenara, km 61.4, where they were neck-and-neck. But in the last 20 km, Trujillo gained an advantage of about eight minutes from Mayor.

In women's race, the Canadian Claire Heslop dominated from the very beginning of the race, with local runner Sandra Moreno hot on her heels. At the km 61.4 Moreno took the lead and built up a gap of just one minute. But in the last 20 km the Canadian overtook the Canarian runner, gaining three minutes by the finish line, with a total time of eleven hours, fifty seven minutes. Third position would go to Latvian Elina Kabalina. 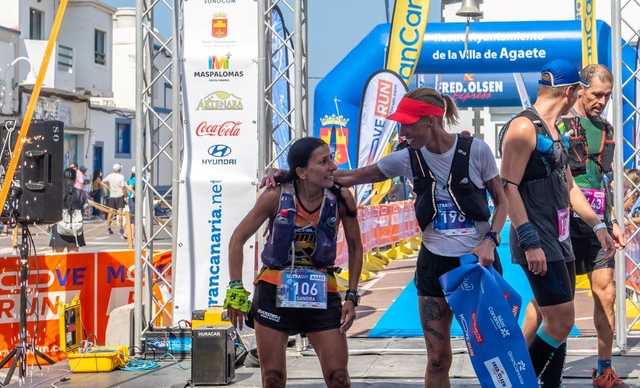 The Trail Sky TAA50, a medium course of 50 km, started at Plaza de Tunte. All the finishers can attest to the harshness of this race, with temperatures that exceeded thirty degrees and haze prevailing during the whole day. There was a tough fight for the final victory between Ramón José Roger and Enric Gómez in the men's race. They passed together by Pico de Las Nieves, Cruz de Tejeda and Artenara. The final victory went to Roger, with Gómez second. In women's race, the win went to the Slovenian Ana Flasker.

Finally in the Mini Sky AA21, with a distance of 21 km, the winners were Samuel Santana and Yazmina Castro.

The 'Be Cordial Beyond The Coast Sky Tour Gran Canaria' race is organized by MOVE RUN, and has announced that its fifth edition will take place on October 15, 2022.