Another Kenyan Double at Krkonossky 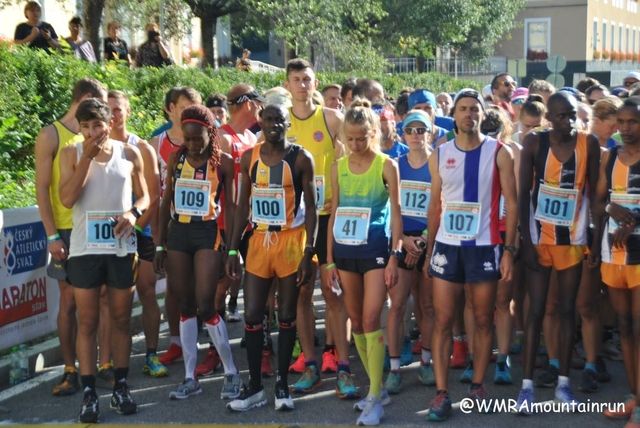 The sixth stage of our World Cup took place on August 15th at Krkonossky Half Marathon in Janské Lázně in the Czech Republic. It was the first time that the race has formed part of our World Cup and it’s great to be experiencing some new countries and events this year.

As well as the World Cup, which attracted some great international runners, this race also served as the Czech Republic Long Distance National Championships, so it also attracted the best Czech runners, several of whom had performed really well in the 2019 World Mountain Running Championships. So we knew we’d have a great race!

At 21km, with a total elevation of 1,050m, this race was classed as a classic mountain race for the World Cup. The race starts in the centre of town (Colonnade Square), then proceeds to climb the mountain path across the top of Černá Hora Mountain to the small ski resort town of Pec Pod Sněžkou and then comes back down in a loop, finishing back at the square.

The conditions were already hot as the runners set off at 9am, and they were only going to get hotter. Right from the start three men formed a group and it was Timothy Kurui, Geoffrey Ndungu and Marek Chrascina. They ran together for the first 6k, emerging at the first checkpoint neck and neck. In the women’s race Joyce Njeru struck out alone, opening up a gap to Barbora Macurova and Pavla Matyasova. Njeru had put 1min 50s of daylight between her and Macurova, who in turn had a 10 second gap to Matyasova at the 6k point.

By the Černá Hora summit at 15k the top 3 men were still together, with Timotej Becan, Evans Kiptum and Jiri Cipa chasing hard, but Ndungu had clearly decided that enough was enough and started to drop the hammer. At the same point in the women’s race Njeru had opened a gap of 1.45 on Macurova, with Matyasova a little further behind. As they started the last descent, it was still quite open in both races. Coming into the finish Ndungu had managed to open a gap between the two chasers and eventually won in 1.32.30, with Kirui coming in just under a minute behind in 1.33.22. Chrascina chased him hard and took third spot in 1.33.35. In the final stages of the women’s race Macurova did manage to claw back some of the gap to Njeru, but Njeru won in 1.50.02, with Macurova just 25 seconds behind her. Matyasova took third in 1.52.45. Don’t forget to check the effect on the World Mountain Running Ranking at: https://ranking.wmra.info/

Next stop Vertical Nasego and Trofeo Nasego on 4th and 5th September.