In our next athlete story Fujio Miyachi of Japan tells us about his full commitment to the World Cup and the thrill of earning his first national vest to compete at the World Championships.

2013 was an unforgettable year for me. In 2012, I competed in "Tek na Grintovec" and I could not forget the rigors of the World Cup, but more importantly, the excitement of the experience.

I was eager to challenge in a race on the world stage again and wanted to participate in a series of races instead of just one. The WMRA Grand Prix (as the World Cup was known then) had six races including the World Championships in 2013.  I decided to take part in all six races that year, starting with the first race in France in June, but this year I especially wanted to compete in the World Championships in Poland in September.  Because the World Championships needed to be represented by each country, I needed to be selected by the Japan Association of Athletics Federations (JAAF). However, at that time JAAF did not have selection criteria (e.g., qualification standards) for sending mountain runners as a national team member.  So, I went to the JAAF with my results to consult directly with them.  One day in late July, I received an email from the JAAF confirming my participation in the World Championships, perhaps because of my 17th place finish in the World cup in Slovenia in July.  I was actually in Poland at that time to prepare for a big mountain running race, the World Long Distance Championships.  It was a pretty strenuous trip, as I had run the World Cup races in Italy and Slovenia and then headed right back to Poland.  However, I wasn't sure if I would be selected as national team member for the World Championships, and so I was bouncing around in Europe as much as I could. Fortunately, JAAF informed me that I would be sent to Poland, so I decided to take it easy and spend my time there.

As the World Championships in September approached, the JAAF send me my first national kit.  I'll never forget the joy I felt when I held it in my hands and put on my vest for the first time. Above all, I felt a sense of accomplishment that my challenge had finally been recognized. Of course, there were always strong competitors from many countries.  I was a challenger.  I just had to do my best.  I felt an inexplicable sense of tension, but much more than that, I was very happy.

When I arrived at the local airport in Poland, I was greeted by a car.  It was late at night when I arrived, but I was warmly welcomed by a local staff member holding a sign for the race.  I went to the hotel and went to bed immediately.  The next day and the next few days were dedicated to the World Championships.  It was very hectic and there was a lot to do during those days.  Prior to the race, I had to check out the race course, confirm the registered race wear for any discrepancies, read the regulations, and attend the Technical Meeting and WMRA Congress.  If I had been a member of a big team, it would have been normal for the team staff to attend these meetings.  However, because I was a member of Japanese team with only a few athletes, I had to attend all meetings by myself in order to get the necessary information. 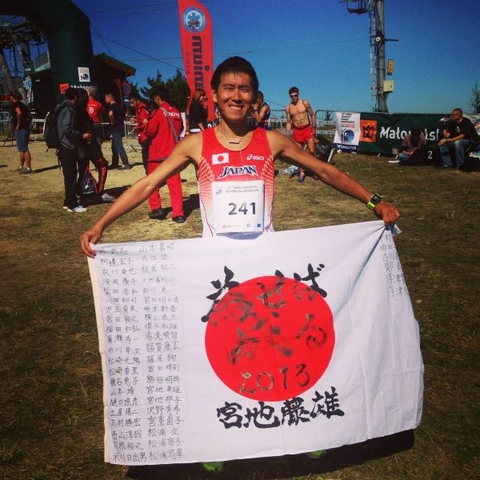 The night before the race there was the Opening Ceremony.  We went to the center of the town, lined in an alphabetical order, and marched by country.  Each country's runners were greeted with many cheers from the gallery.  On the day of the race, I ran as hard as I could to live up to their expectations.  The course that year was a circuit of 3 to 4 kilometers per lap.  A special course was built on the top of the ski resort slope to make a loop, which made it easy for people to cheer.   As the laps went by, the number of runners decreased little by little due to injuries.  As I passed them, I held on and kept running.  My result was 86th place.  There was no limit to how far I could go, but I did the best I could at that race.  At the finish line, I was warmly welcomed by a volunteer interpreter who had been arranged by the race organizer.  The night after the race, I took part in the closing ceremony.  After the ceremony, we all had a buffet style dinner where we exchanged our own national team kit and soaked up the aftermath of the race.  The highlight was afterwards.  A dance party started at the venue and it was a big hit.  I was so surprised to see it because I couldn’t understand where their energy came from when they were supposed to have given it their all in a race.  At the same time I think I caught a glimpse of their strength.  They were really tough.  I was proud to have been able to run with these special runners, and I renewed my determination to run as well as they did. 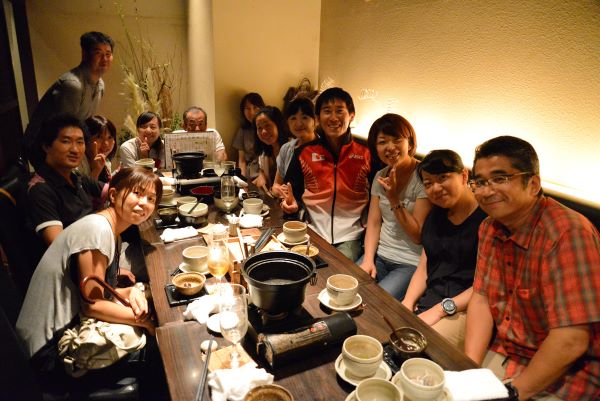 The week after the World Championship, I went to Austria, where I competed in the fifth round of the World Cup.  I finished the race in 20th.  And then, I took part in the final round in Slovenia after returning to Japan for a while. I completed that race in 22nd place.  I had no outstanding ability.  However, this year I was able to compete in the World Cup and ranked in 23rd overall.  It's a great thing that there is a way to challenge yourself.  I would be happy if more people knew that mountain running is such a way to challenge themselves.