'Know And Trust What Works For You' - Interview with Sarah Tunstall 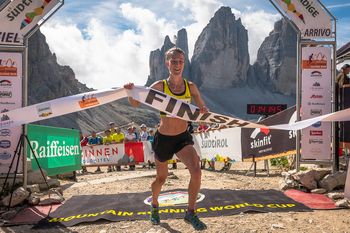 We spoke to Sarah Tunstall, GB mountain runner who bases herself in France for periods throughout the season. Sarah has had considerable success on the mountain running circuit over more than a decade. She finished 3rd in the European Championships back in 2008 and, more recently, has finished 2nd and 3rd at the World Championships and won the World Cup. In 2019 she won Grossglockner and Drei Zinnen. However, despite achieving great success over a number of years she has suffered from injuries which have forced her to rethink her approach to training. Here she tells us what she's learned from her setbacks and how she's found the right balance.

Can you tell us a bit about your running background? Did you start running as a kid?

I started running at an early age but not in any serious fashion. I always loved sport and being active and played netball at Primary School and walked up fells with the family which often resulted in a race to the summit against my sister! As long as I can remember I’ve been quite (!!) competitive and my earliest running memory is from my last year in Primary School doing some practice laps with my Dad on the local rugby pitches for the district sports 400m race...which I won!

You had success as a junior and then you've also had huge success as a senior. What advice would you give to junior runners who want to make that jump successfully?

In hindsight I think I was maybe just lucky that I wasn’t a very good junior! I would make County XC and England Fell teams but my best result (which I was delighted with) was finishing 10th at the English National XC in my final year. It sounds like a cliché but I think that enjoying the sport is the main factor that will ensure a good transition. Luckily this should be more likely in the fell/mountain scene as it can be less regimented or monotonous compared to track or road training. I think the key for juniors is not being pushed in any way and the less pressure on kids the better. The pressure of winning can be hard to deal with as an adult so as a junior it must be really tough, and I think that shows during the transitioning period. If you’re still enjoying running, that can be a big part of making the jump up to senior as running becomes more of a personal choice and if you enjoy it you will choose to keep running.

How did you make the transition from fell running to mountain running?

There was never a conscious transition but looking back the link for me was cross country. I would race XC in the Winter, fells in the summer so I always had relative speed. Hills and speed are essential on the European style courses, which are often on harder packed tracks, and it seemingly makes a mountain runner! I have always maintained that speed is vital in Mountain running. I would gladly run uphill every day but you get found out if you’re not fast and if you look at the profile of the best mountain runners their pbs are usually quite surprising. I’ve never been naturally quick or had any interest in the track but speed is always something I try to work on.

You've been regularly spending time in the Alps for a while now. Did you do that mostly for your running?

Yes. I had injury issues 2010-12 and suppose I stubbornly felt I wasn’t running how I wanted, and knew I could, so I decided to do a few months in the Alps to try and get back to that level. That was Summer 2015 and I was citing the World Champs in Wales as my main excuse to be there (which it was) but having spent so much time there it became very difficult to return to the UK. We've been spending time in the Alps regularly ever since and will try to make it last as long as we can! 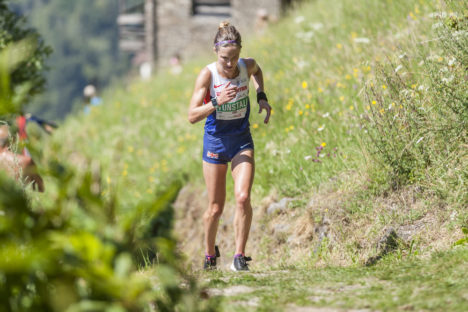 You've been incredibly consistent for so many years now (with World and Euro podiums and a World Cup title spanning 2008 - 2017) though I know you've had injury setbacks along the way. What have you learned from your setbacks and what advice would you give to athletes who want to be consistent and have long careers?

It’s quite scary that 2008 seems like only yesterday! Between 2010-2012 I couldn’t really string any running together without injury problems. Unfortunately it is common amongst athletes that when everything is going well and you’re fit and flying you can suddenly get injured. It’s a fine line and when you’re young you just try and plough on but I think as you experience adversity through injuries you become a bit more sensible. I have never actually gone back to training as hard as I did pre-2010. I keep a relative low mileage, only run once a day and supplement training with biking or hiking. I find that the key is knowing your own body and its limitations. I would far rather run consistently at any level than be inactive especially in the Alps! I’ve had some ongoing heel problems over the past two years and took this winter largely off running to get on top of them. I’ve enjoyed other activities and feel happier that I’m not limping around so much in daily life.

It’s really important to know and trust what works for you, even if you are coached this should be a two-way relationship and not in any way dictated in terms of training.  The same with injuries, don’t rely solely on physios, spoken as a physio we do not know everything! Regular physiotherapy treatment or screening can be very effective for maintaining a healthy body and consistent training, but again it should be a two-way relationship and ultimately you should know your own weaknesses or imbalances and work on them to minimise injury risk.

Why did you decide to volunteer for the WMRA athletes' commission?

It was something I was asked to do a couple of years ago. I’m passionate about all aspects of mountain running and its future so I didn’t hesitate in saying yes.

I am a big fan of mountain running and in particular the classic distances and races. I’ve been lucky to have so many great experiences through the sport, I’ve travelled to amazing places and met some of my best friends through mountain running so in an era where trail and ultra races are becoming ever more commercialised I’d love to help preserve and promote what makes mountain running special. The classic races have often been going for 30-50 years, are relatively low key and no frills, but in beautiful settings. Unfortunately that means we’re often on the back foot in terms of social media, so they get hidden amongst the big flashy races.

On a selfish front I’d love them to stay that way so I can enjoy the simplicity of the beautiful races but I don’t want them to die out or get lost amongst the big brands or long, gnarly and overhyped races. I may be a traditionalist, but I find it quite conflicting to the understated sport of mountain running and think that the mountains should be able to sell themselves without excessive marketing.

What races will you be targeting in 2020 (COVID-19 situation permitting)?

2020 looks like it is going to be a strange and stilted season. Many races I would run have already been cancelled throughout France, Italy and Switzerland, and rightly so. I’d love to think we could be racing towards the end of the Summer but after having the winter off I was in no rush to race anyway and I was already playing the early season by ear. With the Coronavirus outbreak I have not even been thinking about racing or training, there's way more important things right now than the 2020 mountain running season. I’d gladly take having the freedom of outside over racing at the moment and it makes you appreciate the capacity to just get up a hill whenever you want!