Running In The Family: An Interview with Scout and Jacob Adkin

Most mountain runners would admit to being pretty competitive people. Whether it‚Äôs racing or training, many thrive on having others to pit themselves against. And if your brother or sister is also a keen runner that adds a whole new dimension ‚Äì sibling rivalry! Brother and sister Jacob and Scout Adkin grew up in Scotland and soon discovered a love of the hills. Scout has regularly represented Scotland in mountain running and was the UKA Junior Mountain Running Champion. In 2019 she finished 8th in Trofeo Vanoni and 6th at the International Snowdon Race. Jacob, having also enjoyed success as a junior, won the European Mountain Running Championships in 2019 and finished 8th in the World Championships in the same year. Both Scout and Jacob will be targeting the WMRA World Cup this year. We spoke to them about their sporting backgrounds and how they‚Äôve always encouraged each other.
Did your parents actively encourage sports when you were growing up or did you get into sport independently?
Scout: We were an active family growing up trying out a mixture of sports, which our parents would always encourage us in. We were both competitive swimmers racing for our local club and representing our school in various sports before we started focusing more on running.
Jacob: We were always an outgoing family, there would be very few days on any holiday when we weren‚Äôt doing some sort of sporty activity. Our parents always encouraged us to do sport, try out new things and be open to helping us be involved in whatever activity we fancied. It felt like a very natural progression as I grew up, dabbling in different sports until finally committing to running. 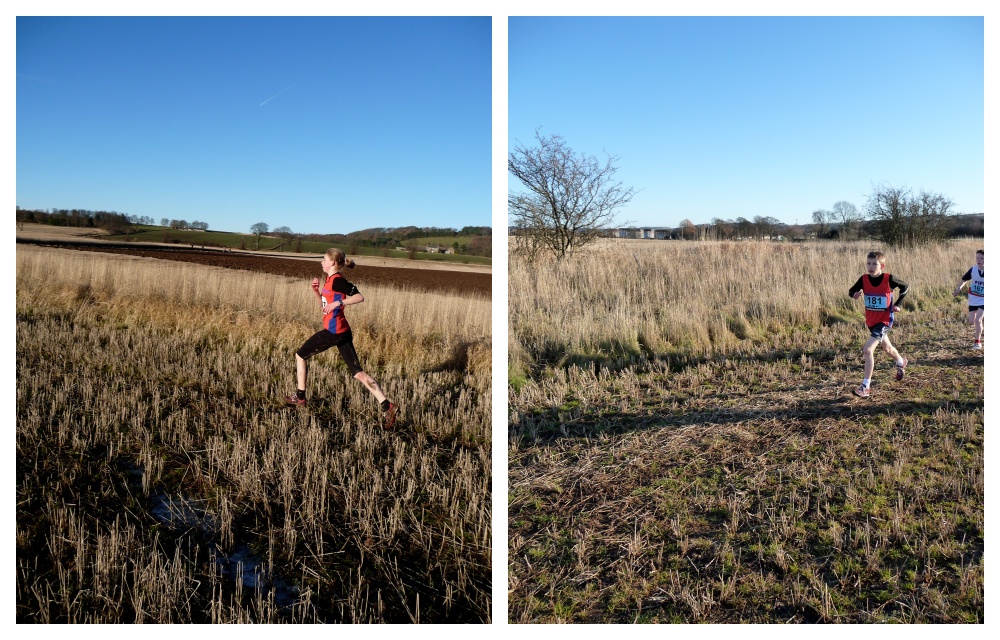 Early forays into East District cross country
How did you both get into running specifically?
S: I did some running through my primary school and was selected to run in the school team at a few events. There is a popular local race called The 3 Bridges Race that we both took part in for quite a few years when we were younger and it was after these that we both started taking running more seriously.
The idea of being able to get somewhere faster than walking always appealed to me ‚Äì why walk when you can run?! As Jacob said, I think it did turn some of our family walks into races (Mum and Dad got good at power walking). I always remember on family holidays when we were looking at a book and choosing a walk route to do we would always pretty much halve the time it said the walk would take!!
J: From a young age we were both very good at turning family walks in the hills into running sessions! Sprinting up and down the hills, wanting to reach the top quicker, but still wary of straying too far from our parents. In a formal sense though, I followed Scout to the local club‚Äôs training sessions, and enjoyed running with the school team towards the end of primary and into secondary school. My first motivation for getting better at running was wanting to be accepted into a team Scout had begun, which had won a local relay race for a few years in a row (The 3 Bridges Race)! 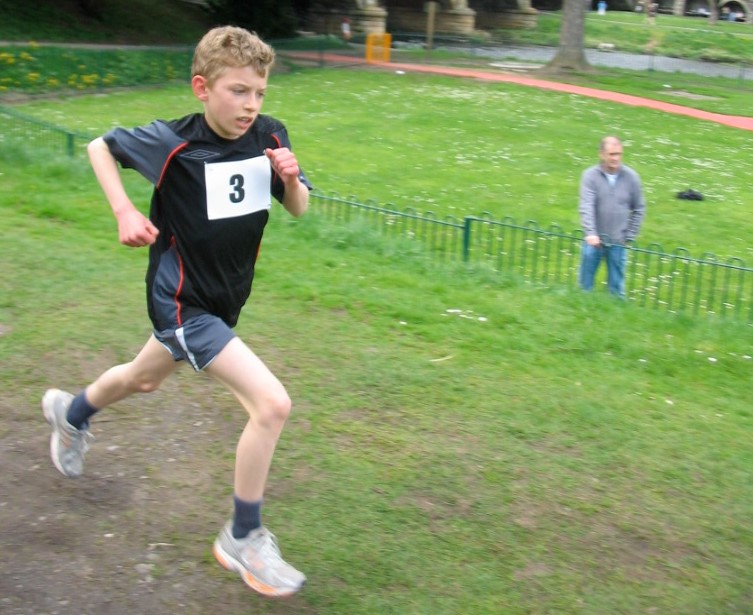 Jacob at the 3 Bridges Race
When did you both start hill running (as oppose to track/road/cross country etc)?
S: In 2008 when I was 15 years old. I had been competing on the track and cross country for a few years by then but in 2008 I did my first hill race ‚Äì which happened to be the Scottish championships. I really enjoyed it and did surprisingly well so I decided to focus more on the hills. ‚Ä¶And it made sense as the local hills were at the top of our road. This was where we ended up spending many hours doing gruelling hill session on (The ‚ÄúHell Reps‚Äù session was most definitely not one of the preferred sessions!). 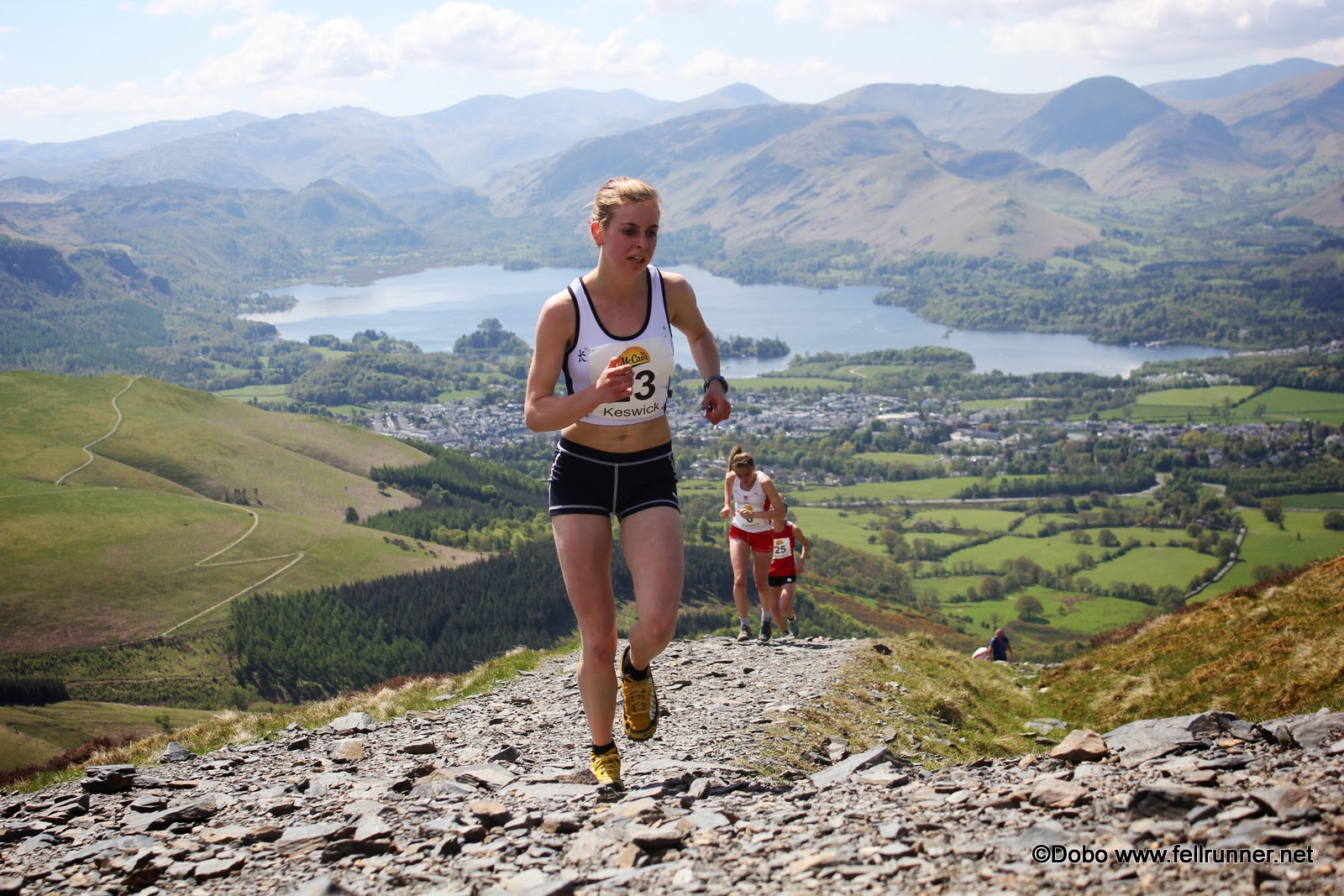 Scout on Skiddaw in the GB trials, 2013
J: The hills and trails started just at the top of the road we lived on, so it was a natural place to go for runs. However, I was still at that stage of just wanting to run really fast, so it was actually with some reluctance that I took part in my first hill race ‚Äì Scald Law, a junior race part of the renowned Carnethy 5 hill race just outside Edinburgh, Scotland. My small size was no match for the harsh wintry conditions and this, I‚Äôm ashamed to say, put me off hill running for a year or two! Still enjoying track and cross-country running into mid-teens, I then made a second foray into the hill racing scene (in more sympathetic conditions) and took a liking to it this time. 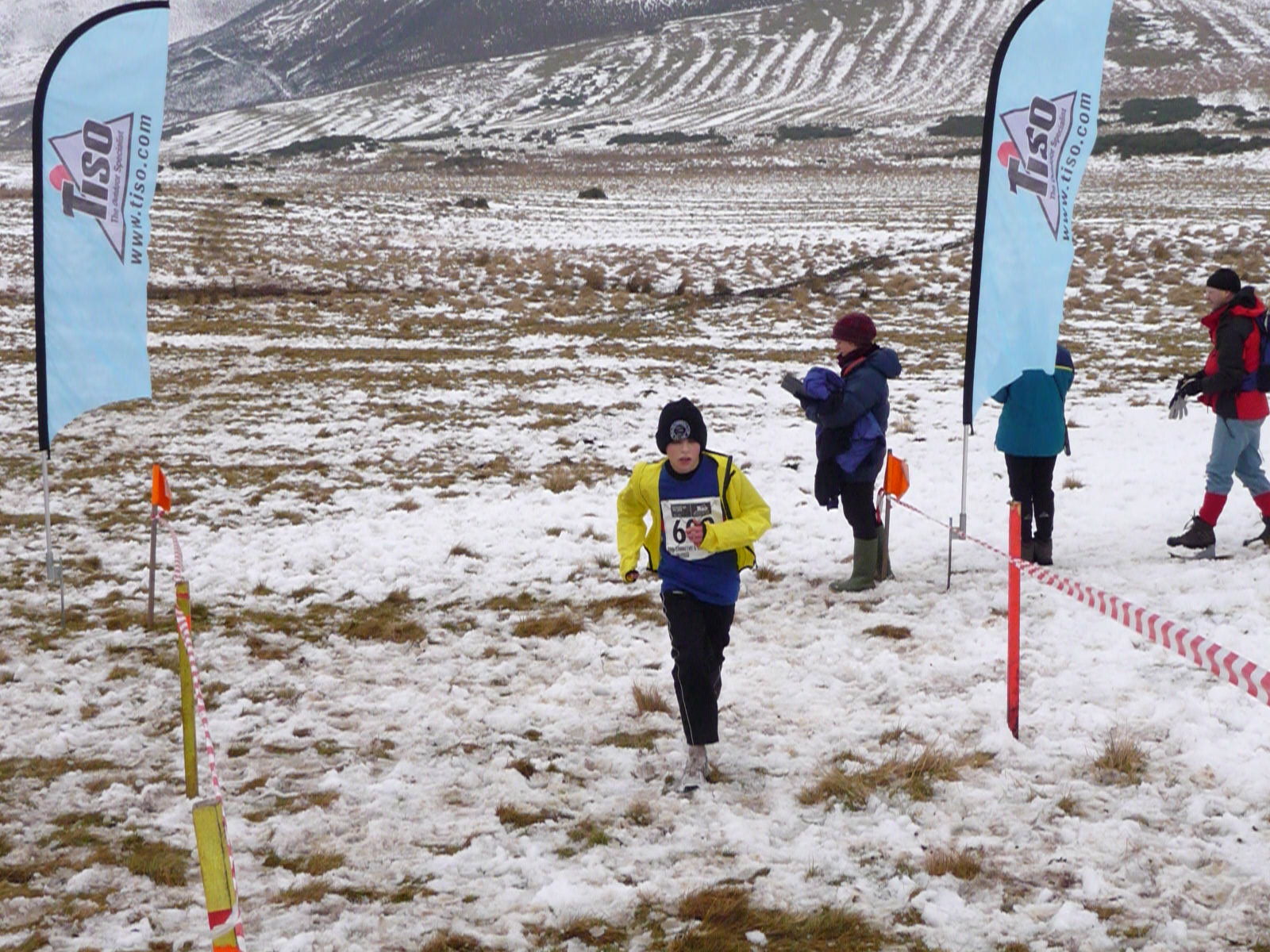 Jacob at a wintry Scald Law in 2008
What was it about hill/mountain running that really appealed to you?
S: The challenge that the mountain brings and the reward when you reach the summit. It makes you appreciate your surroundings.
Battling the elements ‚Äì the weather can always be an extra challenge.
The release and freedom it gives ‚Äì to get away from the busy modern world, to clear your head, get some peace and quiet and see some amazing places
J: At the beginning, it was something that I felt I was doing better at and enjoyed a lot, but then because of this my all-round running improved, and I believe it was important in keeping a healthy outlook on running. Hill running has a great way of keeping you ‚Äògrounded‚Äô ‚Äì the hills are always the boss, rule #1. It does a good job of helping you maintain perspective on things and offers a place to feel much more alive than on a road or track. Finding hill running has meant seeing so many amazing places and experiencing unforgettable opportunities I would otherwise have missed out on. 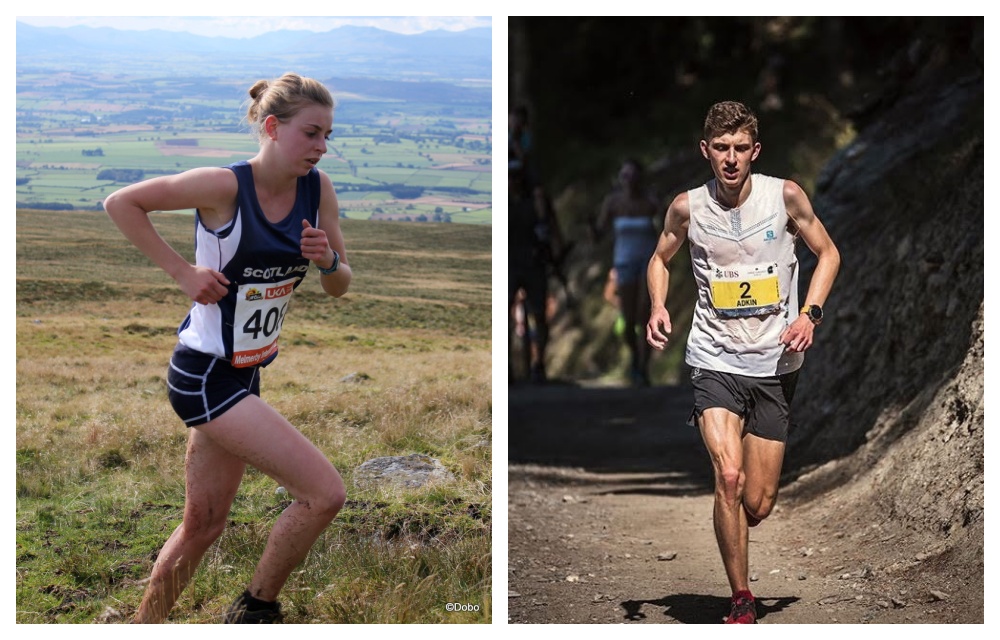 Scout at the British Hill Championships, 2012 (left) and Jacob at Sierre Zinal, 2018 (right, image by Evan Davies)
Was there sibling rivalry between you when you were younger? Do you think it helped you to have a sister/brother to push you?
S: Yes ‚Äì there was always the pressure of my younger brother getting faster than me! It sometimes felt like any sport I tried, he then tried, and he always seemed to end up better than me! However, it did give me that determination and self-motivation to always try to improve and become better.
Yes ‚Äì it motivated us, especially once we both started structured training plans (thanks to Gregor Nicholson who was our coach) and we had races to aim for. You always wanted to be first and be the better one!
J: I think it was only natural that I wanted to beat an older sister! Scout was a great role model for me though and motivated me to keep working hard at running and other things in life. As there wasn‚Äôt that many around us that took part in this discipline too, I think it really made a difference to have Scout there to be inspired by.

'I'm smiling but I'm going to take you down' - some sibling rivalry on their local hill, Cademuir, where they grew up
Do you ever run together now? Does it ever get competitive?
S: Very rarely ‚Äì Jacob spends a lot of time in Europe now. Normally Christmas day is a regular once a year run together. Less so now, but it‚Äôs now more me hanging on and trying to keep up and the determination that I will not give in and ask him to slow down! 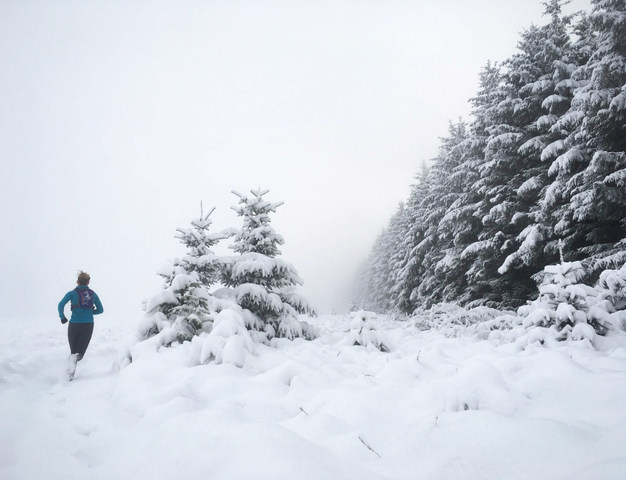 Scout on the traditional Adkin Christmas run
J: Not often as we don‚Äôt live near each other for most of the year, but when our paths cross, we‚Äôll head out together. Hopefully it will occur more this summer when our race calendars coincide. In terms of competitiveness, it‚Äôs not too strong anymore but, I can‚Äôt lie, there‚Äôs always going to be that inner voice urging me to win the small battles during a run together!
What are the main differences between hill/mountain running in Scotland and running in places like the Alps/Pyrenees?
S: The mountains are bigger!! 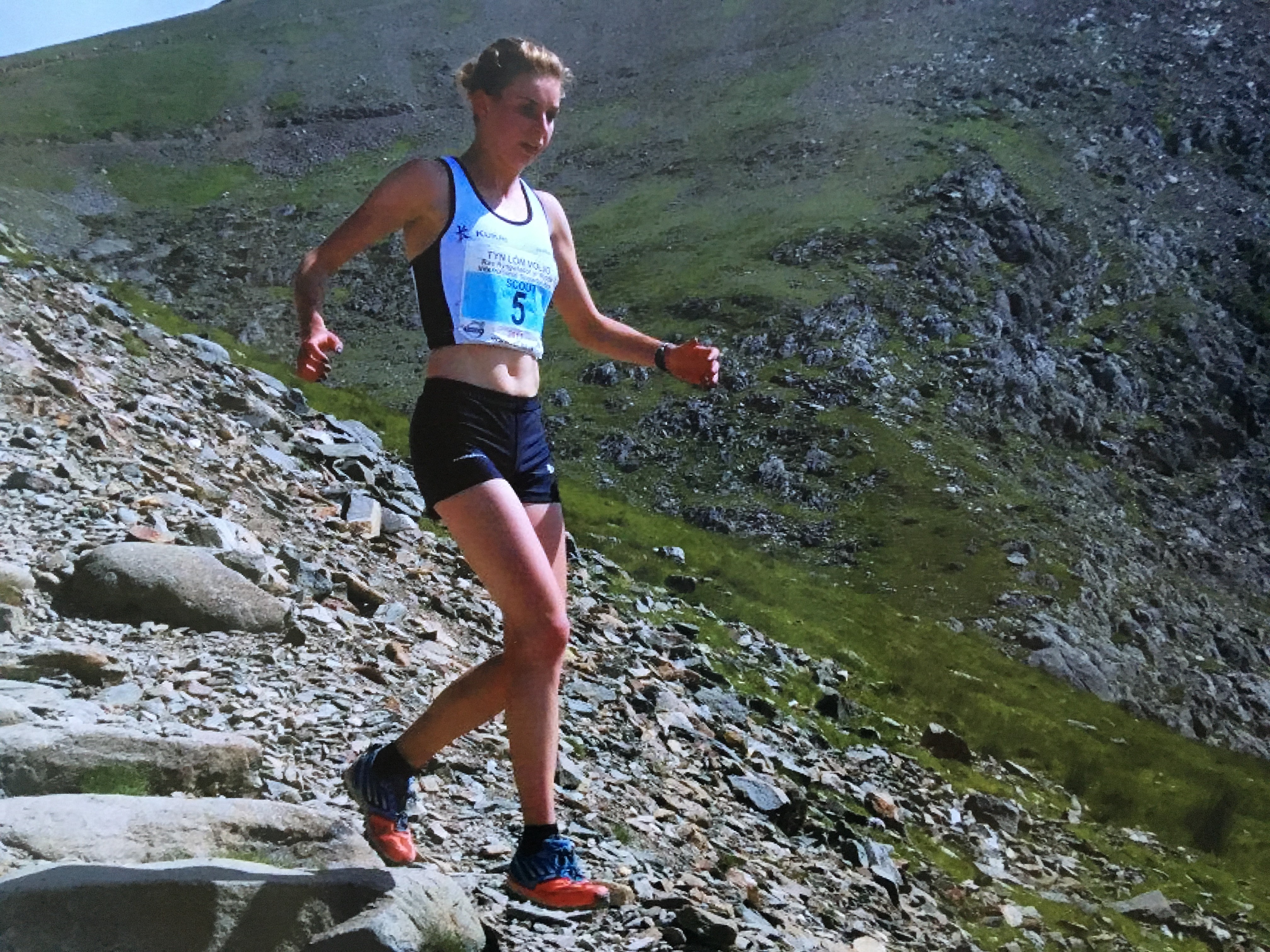 Scout at Snowdon International 2013
J: The mountains of places like the Alps are of course much bigger than those in Scotland, but one of the big differences between the two is the physical experience of running in them. The alpine mountains are a haven for trail running, paths are plentiful, and it would be very strange if you did not see another person on your run. They offer jaw-dropping panoramas around every corner even after a relatively straightforward climb up on good trail. The mountains in the north of Scotland offer up equally spectacular views, but I‚Äôve found only after a more challenging journey to reach them. There‚Äôs often only a small path or no path at all, and no regular fellow hill-goers to maintain your confidence that you‚Äôre not lost either. They‚Äôre a haven for solitude and fortitude (the weather can be interesting on occasion‚Ä¶). 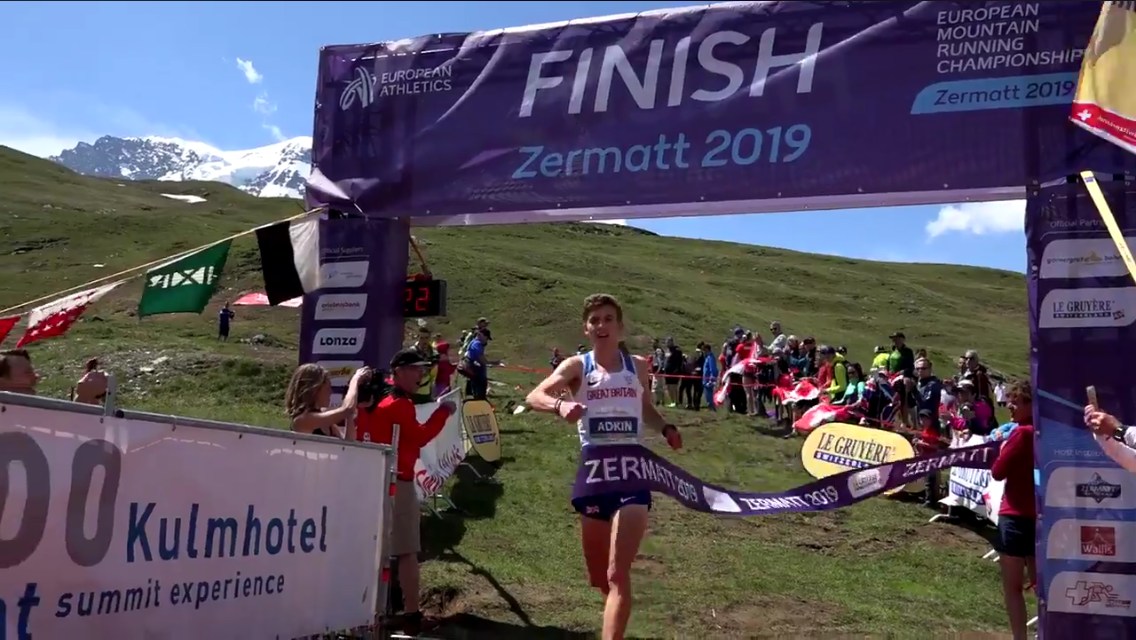 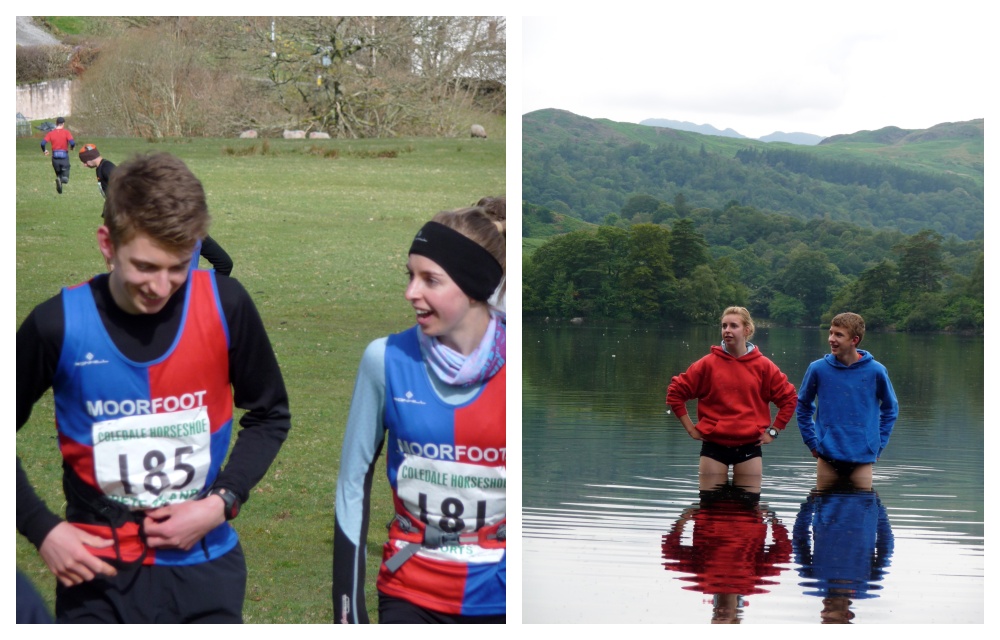